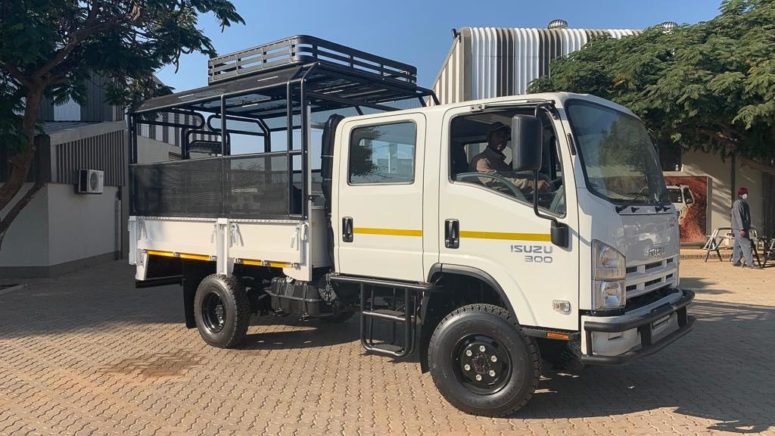 By Editor
13th Jan 2020 , 11:11 am
Letaka Safaris is a mobile safari company based in the north of Botswana, in Maun.
Their operation requires vehicles for back-up and support to carry their equipment out into some of the most remote areas of Botswana.
Based on a truck that we completed for them a few years back, we had a good idea of what they were looking for. The purpose of this vehicle was going to be for back-up support, which will assist in carrying equipment needed for the mobile safari setup. These will be items such as tents, bedding, fridges, food and drinks, tables, chairs and so much more!
We have made a few minor tweaks to this version, compared to the original design:
The original truck, that we had equipped previously, had a basket over the cab. The problem with the original design is it required structural support around the cab to support the weight of the basket and for any additional luggage loaded into the basket. This design had its disadvantages. It required a lot more material and added additional weight to the truck. The experience from the client, based on the first build, was that the framework on the cab was flexing when the vehicle was articulated in rough terrain, which meant that the framework could potentially damage the body of the cab. 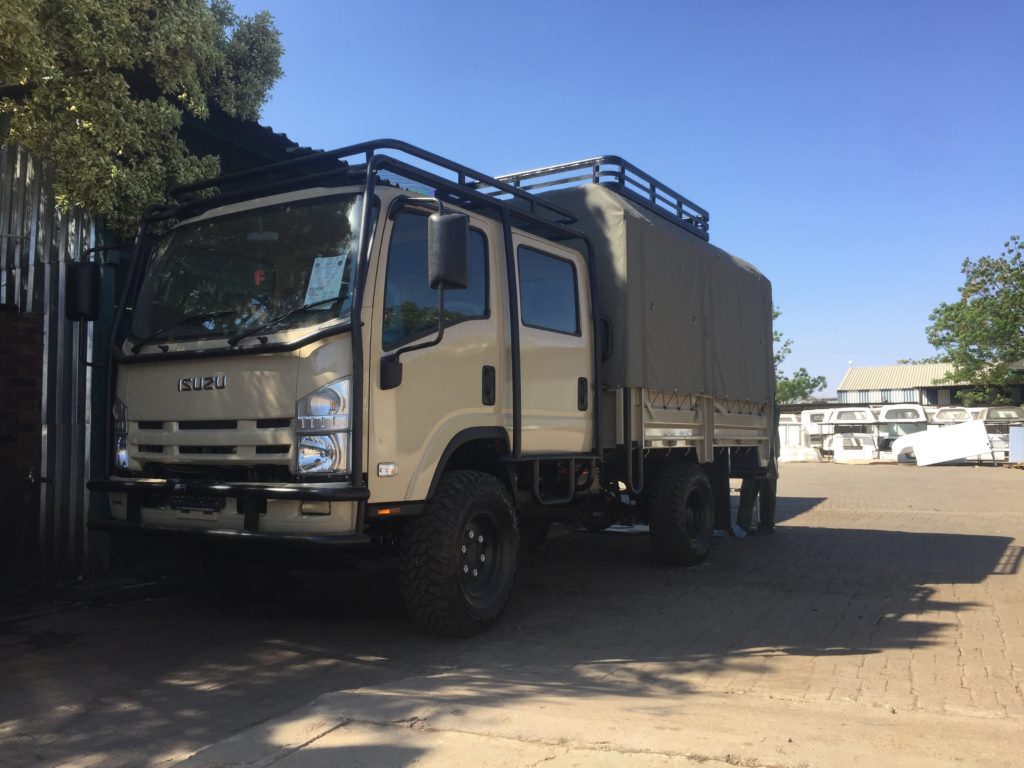 With a new design and plan in place, the fabrication team set off with getting some pipes bent. They started off with an angle iron frame around the load bin. The pipes were then bent individually to start shaping the structure, which was welded to the angle iron frame that was already bolted down to the load bin. Profiling the bends so that each individual pipe had exactly the same angle took time and precision to get each bend consistent with the other.
Fabrication first got the basic “sub-frame” built up. The “sub-frame” is the exterior frame, without all the finer detailed work. This was also the foundation of the build. Therefore, it was important to get their angles and lengths correct at that stage, as it affected the more detailed work further down the production line. 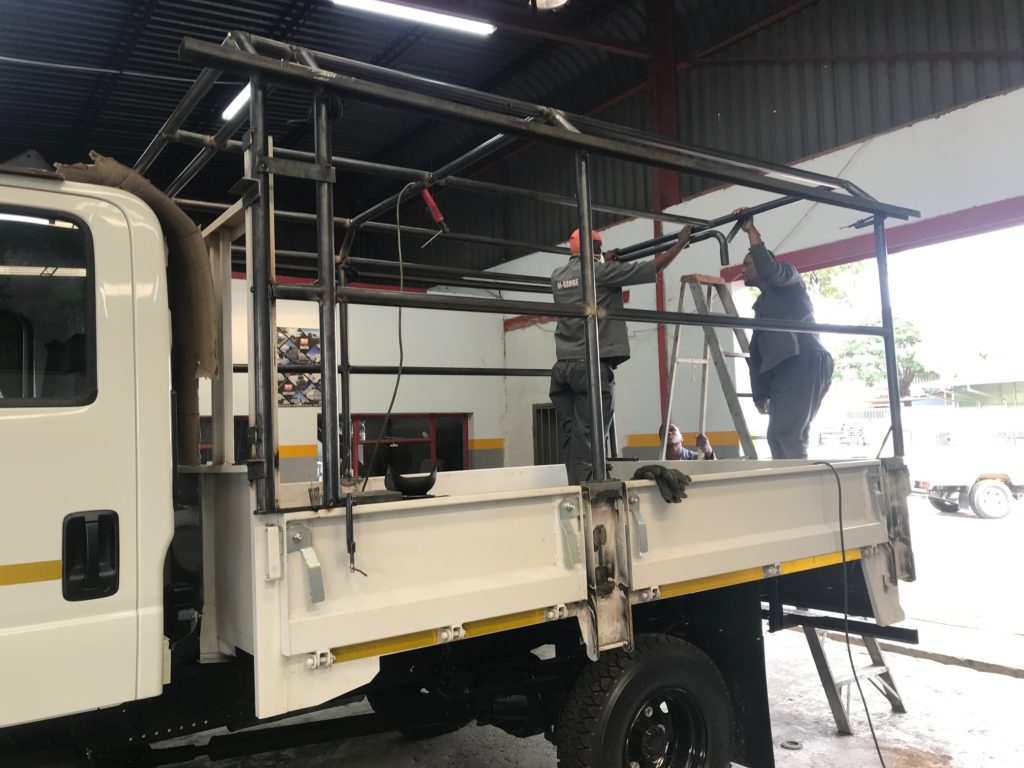 Whilst the guys were busy with the framework, they had custom built a bush guard for the front of the truck too. This comes in handy in the event that the client ever wanted to fit additional driving lights, but also protects the front end from the elements faced out in the bush. On the rear of the truck they fabricated a heavy duty tow bar with a standard trailer connection. 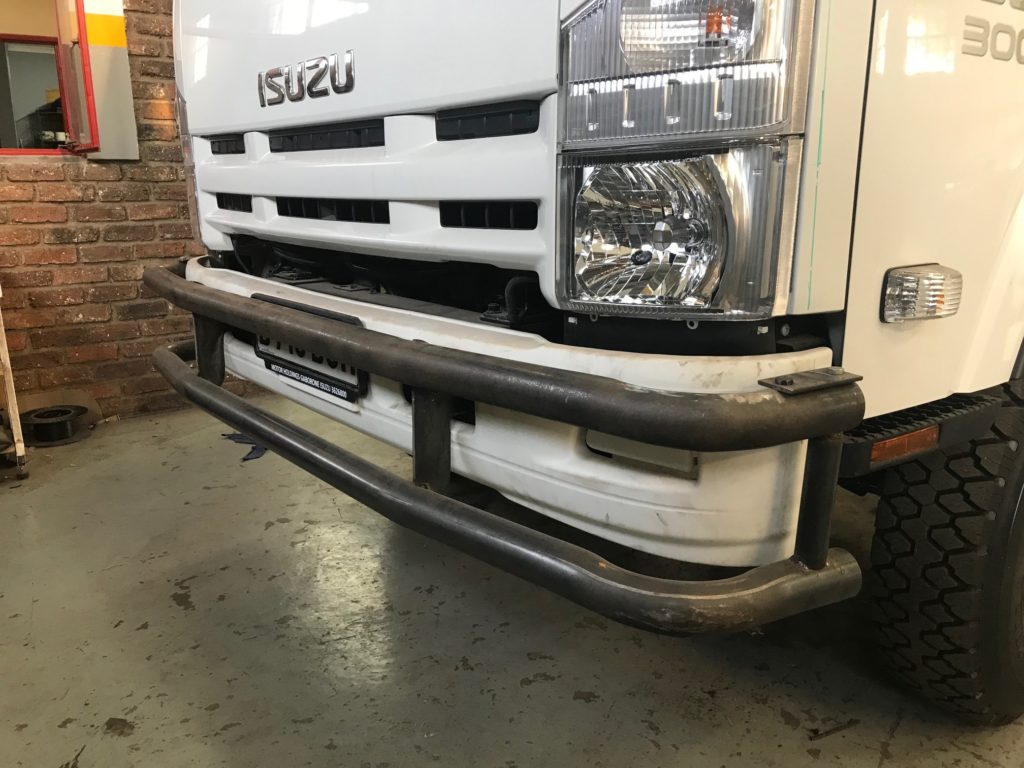 Once they had the outer frame bent and tacked into place, they started on the rear swing gates and drop down-stairs. The gate was designed in such a way that it accommodates the drop down-stairs, as well as opening fully, to maximize the accessible load bin space at the rear. The stairs were shaped in with the rear swing gates which also formed part of the gate, when closed. This was so that the client can maximize on space. It took a lot of design-thought to combine these two parts of the build. For one, we needed it to work, but more importantly, we needed it to look neat and tidy! With regards to fabrication, this can sometimes be a challenge. But our guys got this one in the bag nicely!
Now that the main structure and basket had been bent, tacked and fitted to the truck, the team went over their work with a fine toothcomb to make sure angles and lengths were all consistent before they welded it up properly. In the painting booth they polished up the welds, to make sure everything looked seamless. This stood out once the rails had been painted. Nothing beats a good weld.
On both sides of the truck, they had fabricated drop down tables. Having made use of the existing drop sides, we used aluminium plates to clad the drop side. This feature was great because it created usable working space when out in these remote areas. 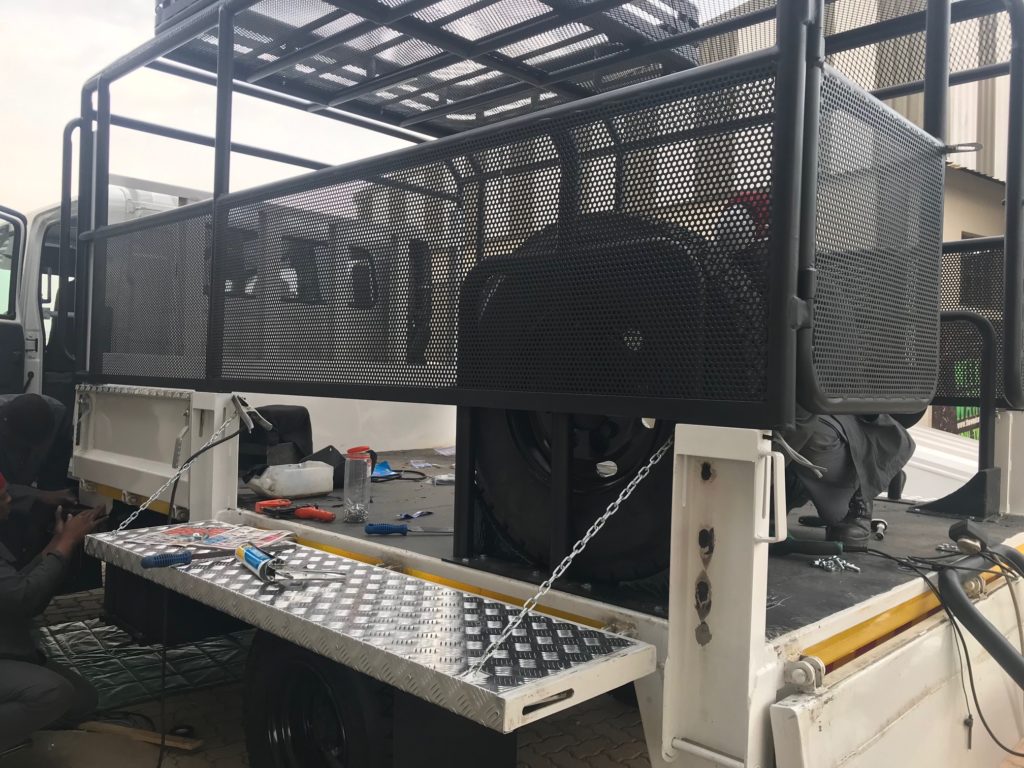 With the rails fully welded, polished and painted they went back on for final fitment and allowed time for the electricals to be done, which was a very time-consuming exercise.
Part of the electrical work included, LED lighting, power points and air compressor. We needed cables to run throughout the frame to the various points. We had LED light strips spread out around the inside of frame. These were all controlled by one switch placed inside the cab of the vehicle. Then we had power points which can be used for any additional lighting, USB cell phone charging ports, camera charging, fridges and many more. Behind the back seat, inside the cab we had mounted a 24V Thomas Air compressor.
For interior protection the client opted to go with Takla’s famous CanTech range of seat covers. For an additional touch, the seat covers were personalized with the Letaka logo.
After all the electrical work was done, it was time for final inspection and quality control before signing this job off. We made sure that every bit of welding had been polished, all electricals, lights and compressor were secure and fully functional. Once we were happy that all the works had been completed to satisfactory level, only then, could we hand over this beaut of a custom-built Isuzu to Letaka Safaris.
Click on this link for more information about Letaka and their services: https://www.letakasafaris.com/ 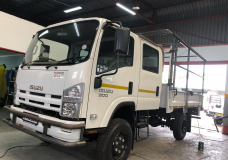 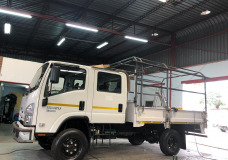 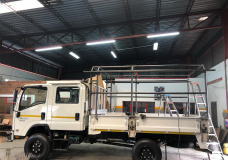 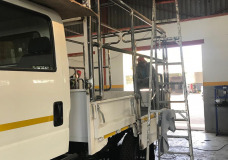 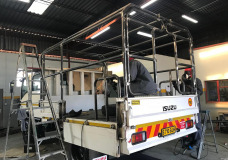 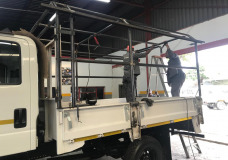 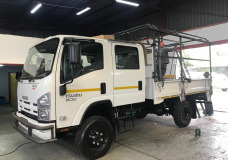 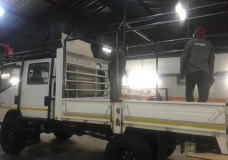 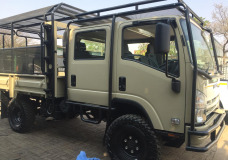 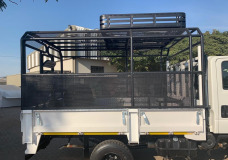 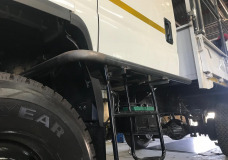 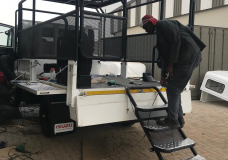 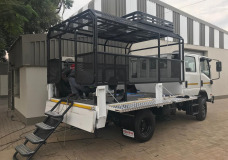 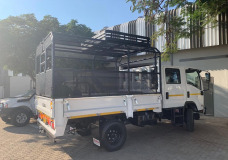 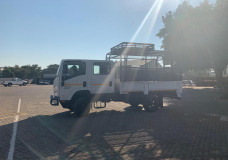 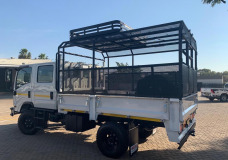 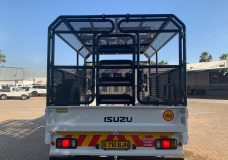 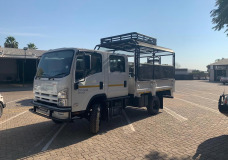 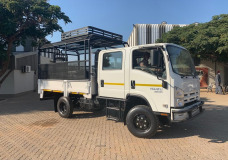 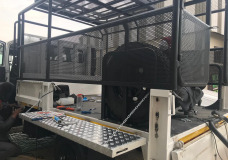 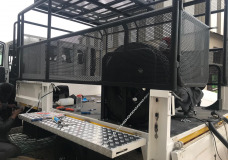 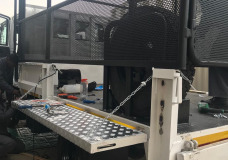 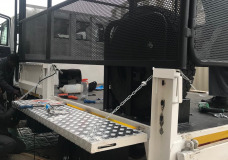 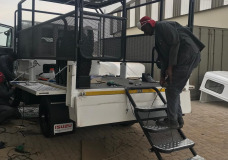 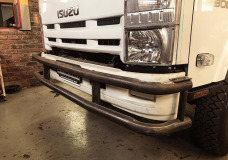